Way out there: GRINDURO

By Ted King. Written for the Cannondale Chronicles.

There’s gold in them hills and there’s Grinduro in them hills too. Travel to northeastern California, impressively far from anything resembling a town and even further from distinguishable cities, and you just might stumble into sleepy Quincy, California. Once a bustling gold rush town, Quincy is no longer a “town”, per se. It moseys along as a CDP, a census-designated place. There in the foothills of the northern Sierra Nevada Mountains, nestled among sky scraping old pines, it still has the feel of the wild west.

Grinduro is the unformulaic amalgomation of a race, ride, party, food, drink, art, music, and camping. It’s a two-wheeled festival like no other way way out in the middle of nowhere.

Welcome to the wild west

All throughout Friday, Grinduro-eve is a steady stream of riders pulling into town. Most are from California, but license plates read from all throughout west of the Rockies. Grinduro is as much a what are you riding event as it is what are you driving kind of event. From complete jalopy to canopy topped, from decked-out Sprinter to sparks flying from a dragging muffler, the vehicle scene is a smorgasbord.

Overrunning the Plumas County Fairgrounds, tent city unfurls throughout the afternoon. A hotbed for lengthy shuttle runs in the nearby mountains, there are those in full face helmets and body armor slowly pedaling around the grounds on long travel bikes. Meanwhile, cross bikes, gravel bikes, hardtails, and full suspension XC race machines are removed from the roof, rear hitch, or inside from the pilgrimage of cars, and quickly mill about the venue as well creating a homogenous mass of cyclists.

Some folks have a beer cracked the moment they’re out of the car. Pinching tires and comparing notes is all part of the game.

Over the years, the hodgepodge Franken-bikes are quickly being replaced by modern gravel bikes. They bring bigger clearance, larger gear ranges, and are truly designed to test for the limits of riding off road.

Mechanics are everyone’s best friend. SRAM, a longtime Grinduro supporter, is on site and they make last minute adjustments to my bike. A larger chainring for stage 2 and a rear derailleur adjustment are the tweaks that are predictably necessary for a good day tomorrow.

Late afternoon dust kicks up as nearly everyone zips on course and pedals some. Testing tire pressures, seeing the terrain for the first time or remembering a particular berm, as much as it lacks humidity here in the Sierras, there’s energy in the air.

Crawling into sleeping bags, tents, and RVs, the food trucks have done their job and are long since cooling down as riders keep their alcohol intake in check. Within Grinduro’s 65 mile loop and 8,000 feet of climbing there are four distinct stages. The party starts early tomorrow.

Alarm clocks croak to life well before the sun’s had time to crack over the horizon. Mini propane fires are lit, as are the venue’s firepits, which quickly become magnets for the bleary-eyed and underslept. With summer long in the rearview, mornings are brisk, bordering on downright cold.

Time’s a ticking ‘til the start gun fires and corresponding nerves are building up. Hundreds of tents are unzipped and slowly unoccupied with the smell of bacon and coffee swirling in the air.

The smell of two-stroke engines enters the scene soon too. It seems everyone within a 250 mile radius in possession of a dirt bike is eager to join the two-wheeled party. Grinduro appears not to lack any sort of volunteer staffing.

Riders collect at the start line and with instructions hollered out, the National Anthem cooly plays from a local’s harmonica signaling it’s time to ride.

A neutral roll out features two miles of pavement before the start of a 13-mile fireroad, dirt climb. Yeah, 13 miles. Immediately transferred from the valley below and deep into the woods, the coniferous pine trees tower overhead.

Despite a small portion of the entire group’s giddy energy pushing the pace at the front, fear not, within those 13 miles, stage 1 is a mere lung busting 1.2 mile climb. Averaging 8% with pitches nearing 20%, it’s a mix between letting it all hang out and deft patience. Hit out too early and the mile high altitude will rear its nasty head. Leave too much in the tank and you’re seeing precious seconds tick away.

Tydeman and I both put in searing fast times, each taking our category, junior men and pro men, respectively. The stage is short enough that time gaps are small. And while results won’t be posted until this evening, nothing is certain so far. Except that the effort was excruciating.

There’s an obvious cadence to this Grinduro that’s unlike Grinduro’s past. Yes, there’s hanging out. Sure, there’s waiting to ride with your buds. Yup, there’s plenty of high fiving after each stage, but it’s also game-on. The front of the peloton takes inventory of each other and with haste rallies on.

The gold may have long since been mined, but in the middle of autumn, the baking northern California sun has dried up the terrain to a parched golden hue. The dirt is packed down to near perfection in the first half of the fireroad climb.

We’re only 5 miles up the first climb after stage 1, with 8 miles to go to the summit. It’s transfer time. The thick forest of pine trees crack open just a bit to allow the growth of golden bright aspens as we crest above the ridge at 7,500 feet. The road is either less maintained or just more beat up as a result of experiencing greater exposure. Sharp, loose, rocks and plenty of moon dust replace the previous carpet of golden gravel.

Summiting the top, there’s a very brief reprieve to catch your breath before rolling into the stage 2 start corral.

Snaking nearly 6.5 miles with sinuous 25+ turns, stage 2 is a mix of flat out speed and controlling the drift. And not gashing your tires.

Loose craggy sharp stones litter the course among the moon dust. It’s a wide open fireroad that benefits those letting it all hang out. It quickly makes sense why there was no lolligagging after the previous stage; start behind anyone and you’re be literally eating dust and blinded by the course right in front of you. My bank robbing dust mask quickly makes a great deal of sense.

Winning times are well clear of 30mph, an impressive feat over the 12 minute effort.

And with that complete, it’s off to the Grinduro circus!

Circus master Mark Weir is clowning around in front of his 5 ton military truck. Wielding both a spatula and beer, the fuel of choice here at the biggest rest stop of the day is bacon wrapped pickles searing on the griddle.

Snacks galore. Animal crackers, candy of all shapes and sizes, and plenty of beer on hand. Green M&M’s are my particular favorite and recovery is key as I again take top honors, extending my lead by 12 seconds. Tydeman tallied second in his category, maintaining his lead as well.

Now topped up on glycogen, err, snacks, the descent continues another ten miles with terrifyingly steep and moon-dusty sections that are cautiously rolled with gentle ease. Unexpectedly meeting the ground here would be easy, but not worth the risk.

At last the group rolls into quaint horse country and the Genesee Valley. A paved, rolling 5.7 mile time trial comes up next, and here enters the gamesmanship. Riders mill about at the junction where gravel meets pavement, pumping tires and eyeing each other up to see who has the horsepower to add another “T” to the equation. It’s easy to ramp up the speed another 5mph, and make it a team time trial.

With leery eyes, some riders casually drift to the back in order to cross the timing chip start line a moment later. Others attempt surprise and hit the front hoping to cause a gap and ride away. These tactics work but only to a small degree, as the difference in the pro men’s race among the very top brass is two seconds. Cyclocross, mountain, and gravel bikes aren’t specifically designed for flat out speed on flat paved roads, but the 29mph average is still noteworthy. Tydeman’s competitors land in a faster group and put some time into him as he drops to second place.

The mid-day lunch spot is in the sleepy town of Taylorsville. In a park, surrounded by trees and forest at the edge of the foothills, a formidable vegetarian feast awaits. Salads on saladas on salads, hipsters delight in La Croix as well as light lagers are on offer for those quenching that need.

Once again, the cadence of the day is noticably different from years past. Riders in the front are probably a full hour ahead of those towards the caboose. Instead of hanging out and dining to our vegan heart’s delight, inventory is quickly taken and riders are once again on the move. The benefits of starting the final section early outweigh another scoop of quinoa. Onward.

A 5-mile climb summiting at nearly 6,000 feet is a bruiser. While not raced, this fireroad is merely the avenue to the final stage, with pitches north of 25% clearly benefitting those with feathery easy gearing. Now 4 or more hours into the day, the difference between “pedaling easy” and “not tipping over” is small.

At last, cresting the summit, riders stop and enroll the ambiguous tire pinch test, removing a solid 15psi or more from tires. Those with droppers, drop. Those without, open the seat collar and do a manual few inch drop on the seatpost.

I remember last year some local speedster brought his downhill bike and tore this stage up! I had this nervous energy and was just about to start the segment on my gravel bike when he rolled up on this tank of a bike. He must have been hating life the previous 9/10 of the day, but suddenly floating down the stage on cloud nine with his gun brought to a knife fight. Run whatcha brung!

Every bike serves a different purpose. My F-Si is built for speed and can take a beating amid the chunder. Stage 4 is exactly that – speed and a beating. Duncan Riffle, former world cup downhiller, made a career of going down singletrack at lightning pace, and wins the stage on a cross bike. I, who made a career racing on wide open paved roads, slot into second.

A 3-mile stage in total dropping more than 1,500 feet, with a half mile to go, the ever smiling Tydeman flats his front tire and loses the deft steering reknowned on his SuperX. He rides into second on the stage and second overall. Still that’s enough to vault him into the triple crown win, as Grinduro is part of a three race series.

The party begins for some and continues for others. With the final segment ending at the opening of a river, kegs are ready, cocktails are shaking, and rope swings are swung. Over the next four hours, a steady stream of riders roll into the finish.

Food trucks of all kinds, a beer garden, an indoor bike expo featuring sponsors’ rigs, the band plays, and podium is ralled around. Grinduro celebrates each of these elements as they’re all part of the wild west tapestry that comes together to make this event one of a kind. 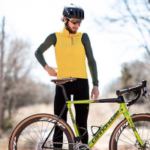 Ted Talks Gravel
If you haven’t seen the Global Cycling Network piece about ripping gravel roads, then w...
by Ted King
King of the Ride: Grinduro, California’s Gravel Adventure Ride
And voila, the Grinduro episode of King of the Ride is here! “Grinduro, baby! This weekend ...
by Ted King