The pre-dawn attack of Hawk Hill in the Marin Headlands is a ritual amongst local cyclists. Rising approximately 923 feet above a sleepy San Francisco, this 1.66 mile segment of Conzelman road twinkles with the blinking of bicycle lights during the dark hours of the morning. The huffing and puffing of determined individuals echoes against the hills as they make their twilight pilgrimage to the top. Some sit and spin, conversing with friends in between labored breaths, others sprint out of the saddle making their second, third, or fifth trip up this iconic pavement. And once they get to the top, all their work is not in vain. The reward is an unending view of the greater Bay Area: from Sutro Tower to the hills of Oakland, and of course, The Golden Gate Bridge wrapped in the dewy embrace of #KarltheFog. They take a quick pause and drink in the beauty that lays beneath their feet. But once they’ve finally caught their breaths, jackets are zipped up tight, gears are shifted, and they take the chilly plunge back down the same windy road. As the sun rises higher over the horizon, an intense symphony of buzzing freehubs marks the end of the ride and a collection of tired legs slowly make their way back to the city. 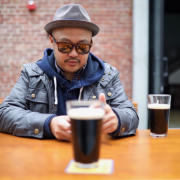