24 hours after leaving home we arrive in Vik, the starting point of our journey into the southern highlands of Iceland.  According to www.guidetoiceland.is, the Icelandic Highlands rank amongst Europe’s largest unpopulated areas and are a centre of raw and powerful energy, where new lands are forged and old lands are pushed to the west and to the east, onto the North American and Eurasian tectonic plates.

Jackie was looking for a challenge, and I was looking to make sure she made it to the finish.  We had found this route on the good ole internet, and it had ranked as very difficult on the scale.  I had voted against it, but Jackie insisted.  So we began planning.  Fine tuning gear.  Mapping logistics.  And the time had come to get it done.

An early morning roll out of Vik brought black sand beaches, beautiful cliff lines and a chill in the air that was foreign to the month of August. At least according to us.

And we set off in search of wild places.

At mile 30 a garden of cairns marked our left turn to begin the ascent off the outer ring of the island towards the dirt and rocky roads of the highlands.

We rode past farmhouses, rivers, sheep (one in particular that did not like me), shaggy horses, more rivers, wide open green expanses, and more rivers.

Making good time on relatively easy terrain, we came across a church and decided on a lunch stop.  Jackie lightheartedly toured the cemetery and church while I cooked.

Spirits were high and smiles all around as we enjoyed the terrain and stunning scapes of the southern lowlands.  We stopped for water refills, and took ample photos, and added or subtracted layers as our bodies adapted to the cold temps.

This time of year, the sun sets around 9:30 pm.  But the sky had begun to cloud up and we were wearing down after 5.5 hrs on the bike. And jet lag.  After a few more miles of searching than Jackie would have liked, we found a great little spot to pitch for the night.

The sun came early, 5:30 am to be exact.  Coffee, breakfast, pack up gear, dress – overdress because it’s cold.  We’re hoping to make it to Landmannalaugar, a stop along a trekking route through the highlands.  I’m surprised to see the sun, and lack of wind.  But it’s chilly and there are lots of river crossings in our future.

Cross a river immediately.  Get kicked in the teeth with a brutal climb.  The easy terrain along the F-roads yesterday has given way to larger peaks as we make our way into the highlands.

Hiking and selfies and who knows how long – we reach the top and contribute a rock for the top of the cairn.  And over the top we roll into a land of GREEEEEEEEN.

The next few hours bring big beautiful (and cold) river crossings, green mossy mountains as far as you can see, ups and downs, and some of the coolest dirt and gravel roads I’ve ever ridden.  We are feeling good.  Jackie is toughing out the climbs and smiling – I think it’s a real smile, I’m pretty sure it’s a real smile.

We had planned on river crossings.  Each of us had brought a rubber Croc shoe that we could put on for each crossing.  It would be cold, but would keep our socks and cycling shoes dry.  And the Croc would dry quickly, so we could wear them in the evenings in camp with thick wool socks.  Not a fashion statement by any means, but highly functional.

The day wore on, and we didn’t make as great of time as we expected.  But just past a thick lava field situated in a river filled valley, we rolled into Landmannalaugar with enough time to have an Icelandic brew, set up camp, and slip into the bags for another chilly nights rest.  Content, and oblivious to the strife tomorrow would bring…

We knew that the trail from Landmannalaugar to Alftavatn would be tough.  It was a trekking route – trail meant for hiking, not biking.  And it started harsh.  After a 200 meter ride through a beautiful lava field filled with geothermal pockets, it all went downhill.  No, it went uphill.  One mile straight up, no riding.  Mostly hike-a-bike.   No, carry-a-bike.

Near the top of an intense section of hike-a-bike, Jackie indicates that her front brake isn’t engaging.  I take a look, and her front brake hose had come apart from the brake lever housing.  Hydraulic fluid was spilling on her front bar roll.  We had a problem.

Before the trip we had put a sweet pair of Jones Bars on Jackie’s Van Dessel CRB rig.  I had, erroneously, mated TRP brake calipers and hosing to a set of Shimano XT mountain bike brakes.  I should have known better, as the hose was too large for the Shimano olive and hose bolt.  But I forced it to go, and pressure seemed good.  And it was good.  Just up until the hose came out, 1.5 miles into our third day in Iceland.  In the middle of nowhere.  With no mechanic or bike shop or parts within days of travel.

I have no photos of this moment. But Jackie cried.  I wanted to.  But I took a deep breath, and told her we would figure it out.  Even if I couldn’t fix it, we could trade bikes for hiking or riding.  We would figure it out.  She considered turning around and going back to Landmannalaugar and looking for a ride out.  I didn’t.  I took out a Leatherman, unscrewed the hose bolt, and did my best to reassemble the set up.  Once done I pumped that left lever until my hand cramped, hoping to get back some pressure in the line.  It came back temporarily, and I taught Jackie how to pump it enough times to get enough pressure to get some braking power.  She was terrified – you see, when you are hiking your bike downhill on extremely technical terrain you need the front brake to keep your bike from rolling away from you.  So in addition to being pushed to her limit hiking her bike all day, she also had to deal with a cramping left hand and the possibility of having her front brake fail.

We’ll make a long story short and say that it all worked out.  It complicated things, and made life much more difficult for Jackie.  But she made it work, and she became tougher and stronger and more confident as a result of it.

So we continued the long difficult trek.

The day continued in brutality.  Soft snow fields to traverse.  Steep descents and ascents, too technical to ride.  But I’m forced to remember that you can’t see this type of stunning earth from a road.

And then the world opens up to show us our destination, a little lake way down in the middle of the mountains.  It’s Alftavatn.  A view that, in person, looks like a fantasy.  It’s not real.  It’s Lord of the Rings, or Game of Thrones.

I am pretty sure that this view changed my life.  Like a hard drug.  Minus the adverse affects.

Alftavatn is close, with a gnarly descent to get there.  But we can see the finish line and Jackie is stoked level HIGH.

Alftavatn is a welcome site as weather moves in.  The wind picks up and rain begins.  We find a small hut and take shelter, drink a couple beers, and warm our bones.  And then it’s time to set up the tent.  30 mph winds.  Rain.  I’m cooking dinner in the tent vestibule.

That night the wind roared over 40 mph, and rain came down.  Guidelines on the tent required.  I slept little, jealous as Jackie slept comfortably, unhindered by what was going on outside.
The next day came cold and foggy and rainy.  We got rolling in 30 degree weather.  River crossings and green mossy countryside early gave way to moon-like scapes in the late morning sun.  A beautiful day was brewing.

I remember this day with fondness.  It was beautiful, we ended up with some great weather.  The hike-a-bike was still high, but on a lesser level than the day before.  We find a great spot to take a rest and selfie, then roll the rest of the way into our stop for the night – Porsmork.

The next day we were looking to get ourselves out of the backcountry and into Hvosvullor, where we could catch a bus back into town and get into a BNB for the following night.  But golly, we had difficulty finding a suitable river crossing and had to add 1.5 miles of difficult hike-a-bike, our gravel road turned into a nightmare of boulders and washboard, the cold rain came, and the wind tipped up to 30+ mph.  And many more river crossings.

And honestly, Jackie got into a rough mood.  So we stopped and chatted about how this is what we signed up for – a challenge, bad weather and difficulties around every corner.  It was why we were there.  And our day got better.  Jackie is a great partner, and I’m thankful for her.

Iceland was beautiful and fierce and unpredictable.  We learned a lot of lessons about suffering, gear choices, weather, and each other.  I came away with a greater respect for Jackie’s ability to suffer through physical difficulty.  And as a couple we were able to navigate stressful situations together and grow closer through adversity.  Also, Iceland is one of the most beautiful places I’ve ever been, but it’s no longer a secret and tourism is bursting at the seams – go there soon.

A big thanks to the brands who helped us get this done with their product:  Big Agnes, Patagonia, Vittoria Tires, and Van Dessel Cycles.  Our product choices were spot on and the quality and reliability proved vital to keeping us dry, warm and on the move.  Except for the user-error with the brakes (and I didn’t even mention that the same thing happened with her right brake on the last day, and we had to fix that as well).  I suck at stuff. 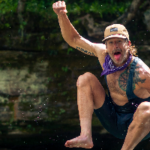