One of the best things about doing this kind of race is the absolute disconnection from the outside world, boiling life down to the simplest elements, eat, sleep run, repeat. It’s good for the soul.

Going into what was to be my 4th Racing the Planet 4 Deserts race in less than 2 years I knew I was underprepared. I knew what to do, how to do it and had confidence that I could and would finish, but despite everything I still felt unready.

I’d been very busy at work, plagued by irritating injuries like plantar fasciitis and was not quite in the right headspace going into this race, my training was inadequate, my kit only came together last minute and I was at the physio 3 days before I flew off to Africa trying to get a last minute tune up and advice on taping my foot.

That said, and perhaps because of all of these issues in the lead up to the event I was pretty relaxed, this was further compounded by the fact that it was being billed as the “Race of Champions” RTP had invited many previous winners of their race series so the competition was strong and the field of runners very experienced.  The pressure was off, I could cruise around and do what I could each day, taking it easier at least mentally. In theory anyway.

Taking it easy never works out quite so easily for me, I have a competitive streak and can be my own worst enemy at times. Day 1 stage 1 I flew out of the gates racing against the guy I had beaten in the Mongolia race by only a couple of minutes over the whole 250km, he’s a great athlete and competitor and he was, as I discovered by 20km, in much better shape than I was in Namibia. We live and learn and I paid hard for that exuberance over the rest of days 1 and 2.

After that I relaxed, and devoted my mind to running my own race not someone else’s (a lesson for life). I didn’t even rush to check results as soon as I was back in camp each day which is new for me, I simply laid back relaxed and took the view, whatever will be will be. I knew I had a good shot at being in the top 10 after the first couple of days, there were some very good runners there who were just beating me on pace over 40km days but I knew the long 84km hot day would be my best day of the week.

Day 3 was notable because we ran the first 20k along the beach (yes more soft sand) past some very smelly seal colonies and several decayed shipwrecks, so far so picturesque. Then came our first and worst introduction to the vicious offshore winds of the Namib as we turned straight into the full force of it and started to cross a soft sandy 10km wide plain. The wind was so strong it sandblasted us relentlessly and made any forward progress painfully slow and very exfoliating.

Day 4 came, the 84km long march, I enjoy these very long and hot days, I’m happy to grind it out for a hours especially in the heat where training in the Hong Kong hot and humid summer months and having lived here for 12 years really pays off. By CP5 and CP6 people were flaking badly in the heat and I moved many positions up in the field beating several of them by a wide margin. I finished strong and felt good all day, after that my top 10 result was in the bag and I was happy with my performance.

Dune day on stage 5 was a particularly beautiful stage with the Atlantic ocean on one side and the vast endless desert of sand dunes on the other as we ran across the ridge lines of some huge dunes. Unlike many other people in the race I rarely suffer with any blisters and so this was a particularly enjoyable day out for me, with blisters it would be deeply unpleasant despite the views. This stage for me was one of the high points of the race, I loved the feeling of running across the towering ridge lines and bombing hard down the steep sandy slopes. It was a really fun day until the last 10k when we ran into the ever present fierce headwind coming off the sea once again, coupled with soft sand underfoot this really tests what you have left in reserve.

The last short 10k day was in many ways the least enjoyable, yes it was short and we were assured of food and rest at the end but as we headed out across the soft sandy plain into a cold damp headwind on tired legs it felt like such a grind. I had foregone my breakfast as I just couldn’t face it and found the last waffle in my pack, forcing it down I looked forward to the finish line and the food I knew would be waiting there. Head down, grin and bear it, it will all be over soon.

Crossing the line was wonderful as always, it was both climax and anticlimax simultaneously, a wave of relief that it’s done, a tinge of regret that the real world will soon pop back into existence, coupled with the burning desire to get to a hotel for a shower (after a 4 hour bus ride).  The race was over and at that point I said to my friend that I was done with multi-stage races for the foreseeable future, so I wonder, as I sit here writing these reflections, are several of my browser tabs open on the pages of other multi stage races?

My training plan for most races centres around my available time, I live in Hong Kong which for most people who haven’t spent time here seems like an impossible place to train for an off road ultra type race. Not so, the majority of the island and Kowloon peninsula is country park and easily accessible.  I run home from work several times a week varying the distances and elevation gain. Typically a 13km to 18km run with somewhere between 400m to 600m of elevation gain and loss. I also mix in some body weight strength training usually halfway along the route at a park where there are pull up bars and other rudimentary equipment.  Because I am usually running home from work I typically carry a backpack with my clothes and laptop etc.. weighing between 4 to 6kg which serves the purpose of getting my body ready to run with weight on my back. Added to this I will aim to complete a long run at the weekend aiming for > 20km carrying nothing.

I would not say that I had a particularly scientific or structured training regimen, I listen to my body and I fit in what I think feels sensible. This for me is not a dramatically increased training load as I train constantly anyway and have been doing so for years whether I have an upcoming race or not. I have a solid base and plenty of experience so I just up the focus and volumes steadily and go with it.

In recent times I have also begun to realise the benefits of yoga after being introduced to it by a friend. Specifically hot yoga which is good for stretching, strengthening the core and legs, heat acclimation and also gets the heart rate up for a solid hour. If you are training for an ultra or running of any kind I would highly recommend trying to build yoga into your training.

I eat healthy whole foods, very little sugar and am mindful of calories, it’s a habit but I’m not militant about it, I still enjoy a good burger and an occasional beer. I don’t change much in the run up to a race other than cutting out alcohol completely.

During the race is a different story completely, dehydrated food in a bag rules each day, coupled with tailwind and stinger waffles while on the move and the occasional bag of nuts as a treat in camp.  For this race my nutrition plan allowed for just shy of 3000cals per day, weight is key as you have to carry everything for the week. This was made up of two dehydrated meals, a recovery shake and on standard 40km days 2 waffles and 2 packs of tailwind.  Roughly 200 calories per hour on the move, the long day at 84km simply doubled up the on the move calories.

Breakfast is always an important meal before heading out to run a marathon distance over soft sand in a desert and this meal above all is something I have struggled with. I have tried everything but after a few days breakfast just becomes unpalatable and something I simply force down because I know I have to. My one coping method and small race luxury is Starbucks coffee sachets, they weigh very little but make each cold morning a little more pleasant and breakfast somewhat more palatable.

By the end of the week you never want to see another waffle or dehydrated food bag.

Races like Namibia, held in the most brutal and inhospitable places possible, strip you down to your bones, your focus becomes singular, eat ,sleep, run, repeat. Your body takes punishment every single day and it doesn’t matter if you are at the front of the pack or the very back, everyone feels pain, struggles with their mind and body but keeps pushing anyway. The people I see in these races come from all over the world from all backgrounds but they all have something in common which I believe is very uncommon. I am frequently asked why I do these races, why anyone would do them, there is no simple answer and it’s probably different for everyone. Some people have suggested that it’s a macho thing to prove oneself or show off, some just think you’re a bit mad. I personally think the individuals who go to these events are uncommon and for the most part have a certain drive and resolve within themselves that wants to squeeze every last drop out of life. Go out there into a desert that’s trying to kill you, get offline, sleep in a tent, don’t wash for a week, eat crap out of a bag, strip the skin from your feet, hurt your joints, vomit, collapse, beg for mercy, cry and then get up and do it all again the next day. In a world of expectations that is constantly trying to tell you what you should be, here is a place where you are stripped bare, down to your will to keep moving forward. 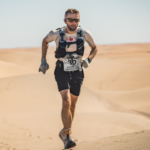