The 2021 Wilderness 101k was the second 100k race on my schedule this year. Everything I’d heard about the trails in this area was that they were rocky, extremely technical, and probably not my cup of tea. In addition to my nerves regarding the difficulty of the course, I found out the week leading up to the race that no crew would be allowed on course and I would need to use drop bags–something I’d never done before. To stack new on new on new, I also discovered the night before the race that I needed to replace the cleats on my shoes. Nothing like being… prepared?

I moved to Roanoke, Virginia almost exactly a month before Wilderness 101 and so my training consisted mostly of recovering (kind of) from Mohican, and then riding and exploring the various trails and gravel roads surrounding Roanoke. In theory, this was an incredible move because I now had exposure to more technical trails, a wider variety of terrain, and LOTs of climbing. In reality, what this looked like was flirting with overtraining, lack of recovery, and the inability to ride easy due to the adjustment to the terrain.

Because the course was supposed to be so technical, I didn’t even consider riding a hardtail for this race. Once again, I rode my S-Works Epic with the Maxxis Ikon 29×2.35 tires. Though there is A LOT of gravel riding in the course, I still think it was a good option for the chunky singletrack sections that would be pretty brutal on a hardtail.

Being new to the drop bag system, I had to really think through how I wanted to sort my nutrition. I ended up choosing to use both drop bags, splitting my nutrition between them. Like at Mohican, I used primarily Osmo in my bottles and Osprey hydration vest, though I did choose to carry one bottle of just plain water to help combat palate fatigue. I added jalapeno chips to the assortment of nutrition, as well as swapping the Clif gels for Maurten gels. I kept the Honey Stinger waffles, the Clif shot bloks, and fig bars.

Seth was able to accompany me to this race, so we left the morning before the race and stopped at the Antietam Battlefield to do a road shakeout ride there and along part of the C&O Canal Trail. From there, we stopped for coffee and dinner before getting in at the campsite towards the end of registration Friday evening. I checked in, then repeatedly adjusted my new cleats and tried them out on short laps around the campsite while Seth got the tent set up for the night. Eventually, I was satisfied with my cleat position and we turned in for the night–only to be woken extra early by the gong being clanged through the campsite to wake up the 100-mile racers. Fortunately, I was able to roll back over and sleep a few more minutes before getting up, eating my breakfast tacos, then driving into town for some pre-race coffee.

This race started with a somewhat chaotic mass start. I’ve never been extremely comfortable in a group, so found myself slowly drifting back in the group as people began shuffling more aggressively towards the front of the pack. That being said, when we hit the gravel climb, I settled in, held my pace, and started making up ground. After the first gravel climb, I didn’t see another female rider the entire race, so had no idea of my place through the race. I just kept riding.

The first section of singletrack was far less technical than I had expected, and despite a bit of anxiety that some crazy rock feature would be right around the next corner, I was able to flow through it pretty well. When I got to the first aid station, I was amazed and impressed at the efficiency of the volunteers: they found my drop bag, filled my pack and bottles, and had me on my way in a matter of minutes.

The ensuing singletrack was more the rocky, gnarly, and technical trail I was expected. That being said, I rode FAR more of it than I expected to be able to, and kept a collected and positive mindset on the few sections where I was forced to walk. It wasn’t until around the forty-mile mark, just after the second aid station, that I hit a dark place. I was doing my best to power up a long forest road climb and battling stomach cramps and had to talk myself through every pedal stroke to just keep going and not sit down on the trail and cry. But I made it.

After the final aid station, there was a long section of rail-to-trail, that despite being a gradual false-flat climb, was a nice relief. I did my best to maintain steady power through that section, then just hold it together the best I could on the final section of singletrack that was less a trail and more a giant dump of boulders that I could barely manage to walk through.

When I got to the finish, Seth was there waiting for me and neither of us knew how I had finished. It wasn’t until nearly an hour later we realized that I had gotten second place! Teresa, another rider from Virginia, had beaten me by nearly 45 minutes, but my solo TT-style effort had gotten me onto the podium! 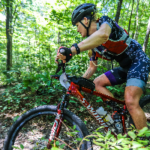 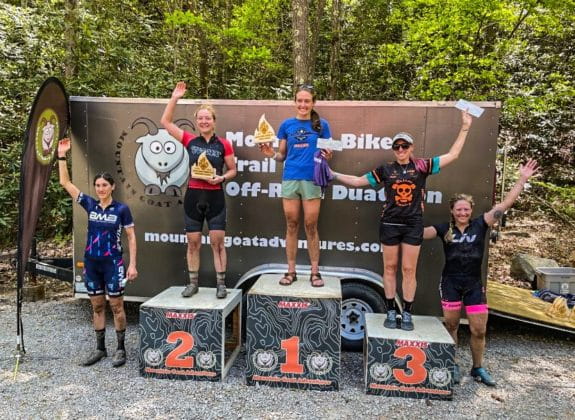 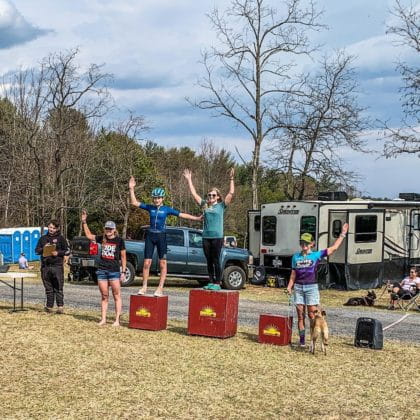