Late at night on May 30 — Dirty Kanza Saturday — Ted King set out from the northeastern corner of Vermont with the goal of riding nonstop to the southeast corner of the state. Over the course of the 22 hours that followed, Ted took on a 310 mile journey, 90% gravel roads with a large portion of those as Vermont’s notoriously unmaintained “Class 4”. There was also an “accidental Everest” as he climbed more than 34,000 feet. During the course of this video, you’ll see a steady decline in Ted’s… well, his everything. A challenge like this is unlike anything ever attempted by the King of Gravel, and it’s a place for Ted to learn, to grow, to suffer in ways unlike he knew was possible. This epic ride is part of the #DIYgravel series. Being that this episode is about Dirty Kanza, it deserves a bigger than normal place on Ted’s calendar, hence the bigger than normal undertaking. This route is the brainchild of Joe Cruz, professor of philosophy at Williams College, lifelong adventure cyclist, Vermonter, and contributor to to bikepacking.com.

Film crew and final production, thanks to Ansel Dickey and Nick Keating of Vermont Social

Thanks go out to Cannondale, SRAM, and Dirty Kanza. 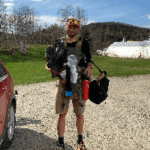